Last weekend was my first visit to Belfast, and I spent some time looking at the city’s famous murals. I wasn’t there for nearly long enough – there are hundreds of murals scattered throughout the city and I only managed to walk around the Falls Road and Shankill Road areas for a short while. But what little I saw I know will stay with me for a long time.

I wouldn’t presume to even try and talk in detail about the context here, but the murals are deeply embedded in years of complicated and violent political history. Public art is always a reflection of power struggles: who is represented and who is left out is a political issue. This is even more true in the case of the murals, which have sprung up over decades, and are for the most part created by people who live in these communities, rather than by artists brought in from outside and commissioned to make work.

The subjects of the murals vary hugely, but many of them commemorate the victims of The Troubles. In a conflict fought at such close quarters, even the smallest of exposed façades becomes a canvas for stating the allegiances of the area.

I was shocked to learn that thousands of lives were lost in the violence, and perhaps just as surprising was that neither me, nor any of the people I was with (Scottish and English) had learned anything about the conflict in school, even though it is very much in living memory and an important part of both British and Irish history.

It’s a moving and hard-hitting experience, but walking the streets and engaging with the murals as a tourist is one of the ways we can learn about the city’s difficult past in an accessible way. It’s also an important reminder that images, signs and symbols are always laced with countless different meanings, and it is worth taking some time to try and decipher them.

How much do we really know about our surroundings? Living in towns and cities, there are fragments of past lives and clues to how the environment has changed scattered all around us, if we look carefully. That careful looking, backed up by detailed research is how artist Nicky Bird is spending her LAND MARK residency with Art Walk Projects, based in Portobello. The starting points for her project are the two bottle kilns close to the shore (dated 1906 and 1909), the only fragments left of the large Buchan Pottery complex, which dominated the area close to the shore, but closed in the early 1970s.

One of the bottle kilns, an alien industrial fragment adrift in a sea of new builds

Portobello is a seaside town between Leith and Musselburgh, east of Edinburgh city centre. It’s a beautiful walk along the promenade, more a place of leisure than of work, but until relatively recently it was an important industrial hub – there was a paper mill and a chocolate factory all within easy reach of the Pottery.

Today a small group, led by Bird, helped to revive a memory of that recent industrial past, through a walk event which told the decorators’ stories. These were the women who painted the ceramics before they were fired in they kiln, who occasionally raked through the spoils to try out their own designs and have them fired on the sly. Like a band of investigators searching for clues we walked around the area and examined maps from different phases of the area’s history.

We also looked at examples of the pottery the women had decorated, and two fellow participants told me they recognised the design – it used to be sold in all the tourist shops in the 1970s, but they had never realised it had been made in Portobello itself. It felt good to participate in reviving that part of the town’s story, and I’ll be keeping an eye out for pieces of Buchan pottery in Edinburgh’s shops from now on. Even the most everyday objects can be brought to life through giving a voice to their past, which is why art projects like this one, which evoke memories that have been lost, are so important, especially for communities that have changed as much as Portobello.

Nicky Bird’s residency with Art Walk Projects is culminating with an event in February, so this walk was really a launch for her project. The completed work promises to be one that shakes off the dust that has settled on Portobello’s recent history, and I’ll look forward to seeing what else is revealed.

It’s been a bit quiet on the blog recently while I’m trying to knuckle down and get my dissertation done. Apologies! However, Edinburgh Art Festival has just opened and I’m going to try and see as many of the exhibitions as I can and write about them on here over the next couple of weeks, so watch this space.

So far, the only things I’ve booked are both related to the same work, Night Walk for Edinburgh by Janet Cardiff and George Bures Miller. My slot for the walk is next Sunday, and it sounds like an unusual and immersive experience. From what I can gather, the artists have created a site specific work which you carry with you on a walk around the streets of central Edinburgh, using a tablet and headphones. They become your tour guides in an experience which mixes reality and fiction. The artists are delivering the keynote lecture at the National Gallery of Scotland this evening, which will cover what it was like to make the work in Edinburgh, and will touch on their art practices more generally.

I’ll be back with more updates as and when I get to more Art Festival exhibitions and events. In the meantime, here’s a photo of some excellent curation I noticed recently at the National Gallery in London, pairing two recent works by Sean Scully, Landline Star and Landline Pool (both 2017) with the work that inspired them, The Evening Star (1830) by J. M. W. Turner. 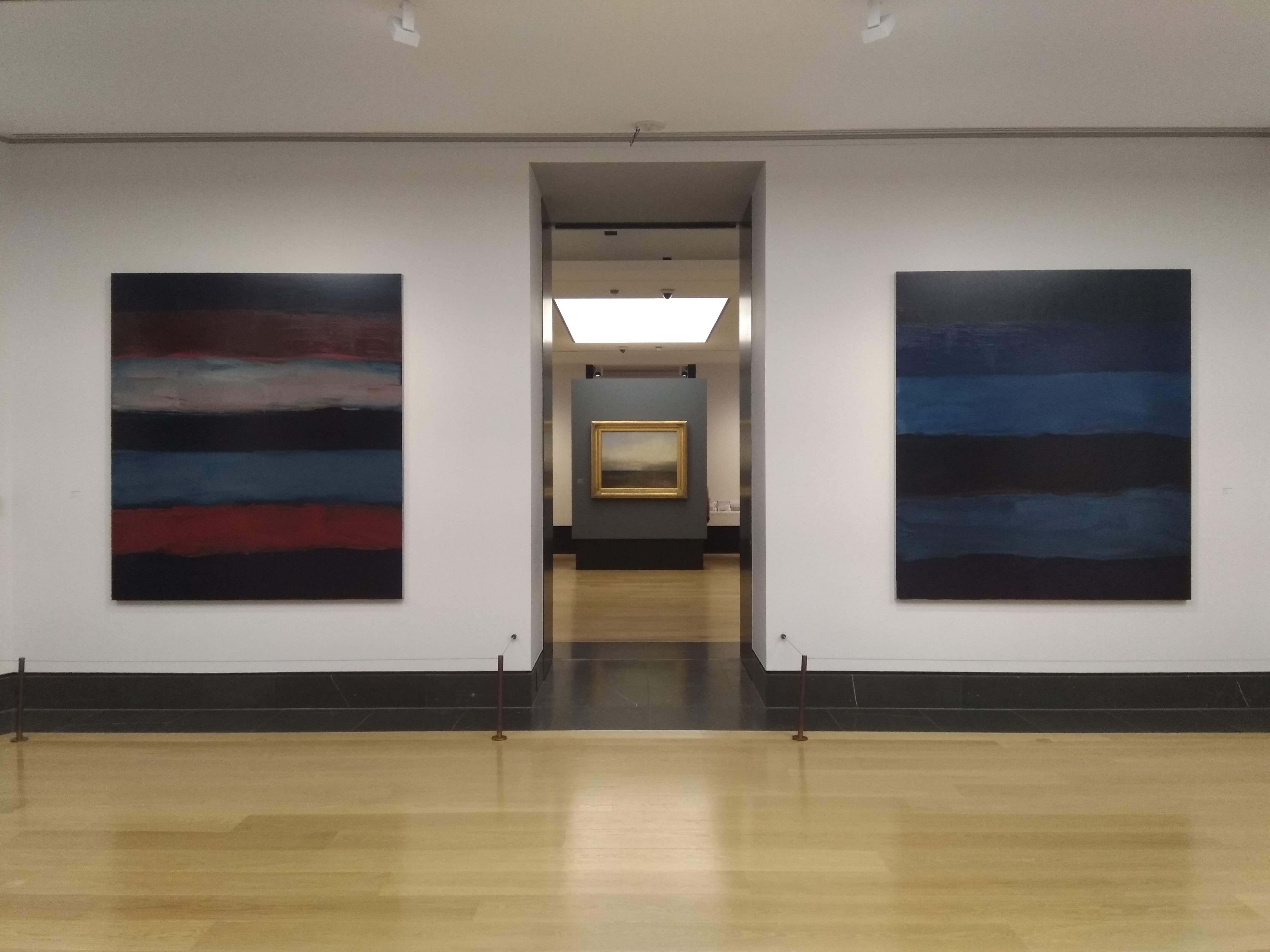 About a week ago I came across a strange sight. There was a huge lorry parked up on a quiet side street in Edinburgh with its sides open, no one was around, but inside the lorry there were about 20 bright sculptures.

I was pretty baffled, especially because there is a certain creepiness in seeing all these laughing characters en masse, but since then have discovered that the sculptures are part of Oor Wullie’s Big Bucket Trail. The trail is happening across Scotland in Edinburgh, Glasgow, Dundee, Aberdeen and Inverness, to raise money for children’s hospitals in each of those cities.

I am not Scottish, so don’t know much about Oor Wullie and his escapades (he is something of a national treasure, especially for the baby boomer generation) but from the statues he seems like a cheeky lad who loves to laugh. Seeing them scattered across the city, they are definitely eye-catching and intriguing, most are painted in bright colours and shiny, glossy paint. Artists were commissioned to paint their designs on each statue, so every single one is unique.

If you’re not convinced, I recommend getting a bit closer, and taking some time to read the plinths, where the artist has a space to explain the inspirations behind their designs. For example, this design by Wee Lainey which is just outside Haymarket is covered in painted bricks to echo the designs of Scotland’s tenement buildings, and the statue has famous Scottish inventions and sayings on him too, along with one of my favourites, ‘haud yer wheesht’.

Even though stylistically they are probably not to everyone’s taste, to me they are kitsch and camp in all the best ways. Public art is always going to divide opinions, but that’s what makes it interesting. At its heart, the scheme is there to raise money for a good cause, and along the way it is supporting artists by commissioning them to make new works. Hopefully the trail will get more people, especially kids and families, talking about art. To me, that can only be a good thing.

If you agree, you can donate to the campaign online.